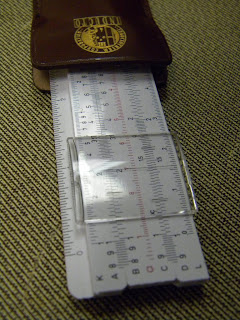 Here are two slide rules. I don't know how they work. John, the Mayor of VocabularySpellingCity used a slide rule in high school physics and chemistry. He says, "I used to use it pretty well."

I visited The International Slide Rule Museum to find out what "using it well" would mean, but the answer was beyond my comprehension. I went to my personal library and perused The Young People's Science Encyclopedia from 1966. I thought, for sure, I'd get it since I am already an adult.

There, a slide rule is defined as:
"a mechanical instrument for doing mathematical problems more easily -- mostly multiplication and division. It consists of movable pieces of wood containing logarithmic scales and matching antilogarithms."

I was still lost. I can't remember what a logarithm is and the amount of energy I would need to spend in order to relearn it, could perhaps power a small village. The right side of my brain is limited compared to the left.

I'd be much obliged if someone could enlighten me just a smidge by completing the sentences below: 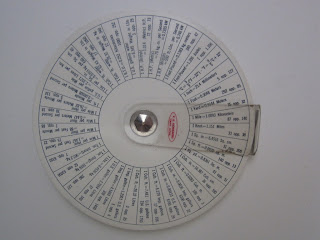 I asked John if he wore the slide rule in his front shirt pocket as a symbol of mathematical wizardry. I had fond visions of the stylish engineering geeks at my alma mater sporting pens and other pocket-size tools. He did not, but kept his in his book bag.
Posted by Jane Dagmi at 11:53 AM

to multiply you add.
to divide you subtract.

the scales are logarithmic which is the magic that makes it all work.

Slide rules are as simple or as complicated as the user. The most basic thing they do is multiply or divide. Notice on your slide rule there are several "scales" labeled A, B, C, D. The C and D scales are the "fundamental" scales that are used for almost everything. They are identical and can slide against each other (hence, slide rule). The numbers on the slide rule are spaced out *logarithmically* - don't worry about the exact meaning of this, just understand that the numbers increase "faster" as you go from left to right. In fact, they do so at a rate that means that a linear distance (e.g. one inch) from one point on the scale to another point (say, to the right) is *always the same amount of multiplication*. HUH? In other words, the distance from "1" to "2" on the C scale (i.e., "times two") is the same as the distance from "3" to "6" on the C scale (also "times two"). Wow! What can you do with this? Well, if you want to multiply 33.2 x 176, you can do it like this:
1) move the scale so that 1 on the C scale is directly over 3.32 on the D scale. This means that now everything on the D scale is equal to 3.32 times what is on the C scale!
2) now just look at 1.76 on the C scale. The corresponding number on the D scale will be 3.32 times 1.76, which in this case is shown as... um... 5.84.
3) okay, obviously, we've got one last step. We wanted 33.2 x 176, and we have 5.84. This is a limitation of the scale, we have to account for magnitude. 30 x 200 would be 6000, so we have a good idea that our answer should be in the thousands. So we turn our answer into 5840. Not quite the calculator answer of 5843.2, but "good enough," right?

That's just one kind of operation you can perform on a slide rule. Depending on which scales are on your slide rule, you can also perform exponents (the A and B scales), trigonometry (the S and T scales), logs of logs (LL scales), unit conversions, atomic mass references, almost anything...

Really all you have to understand is that a slide rule is a way to refer two scales against each other in a useful way.