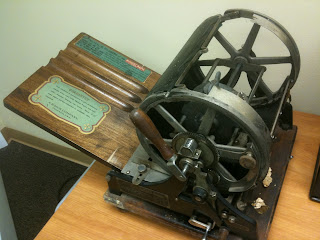 I've been in and out of all sorts of odd stores and even contacted the surplus people related to school districts and government agencies. I've been on Ebay with not much success.

I'm now tracking down the company that made them: AB Dick Company.   Here is a Youtube video of the dedicating of their Chicago factory in the 40s. And I quote vvickers3313 from Youtube:  This was the dedication video of the building that stood at 5700 W. Touhy in Chicago. It was converted from 16mm film, taken circa 1940s. There is no sound. This video will only be interesting to all employees who worked for this great company.

From Wikipedia, the free encyclopedia
The A. B. Dick Company was a major American manufacturer of copy machines and office supplies in the late 19th Century and the 20th Century.
The company was founded in 1883 in Chicago as a lumber company by Albert Blake Dick (1856 – 1934). It soon expanded into office supplies and, after licensing key autographic printing patents from Thomas Edison, became the world's largest manufacturer of mimeograph equipment (Albert Dick coined the word "mimeograph"). The company introduced the Model 0 Flatbed Duplicator in 1887. Later on, the flatbed duplicators were replaced by devices using a rotating cylinder with automatic ink feed. Basic models were hand-cranked while more elaborate machines used an electric motor.
The company had a new headquarters built in 1926, the building at 728 West Jackson now called Haberdasher Square Lofts, and remained there until their move to suburban Niles in 1949.
The company virtually created the business of "quick printing" via storefront shops that printed from disposable plates on duplicators. Tens of thousands of its Model 350 and 360 duplicator were sold, many of which are still in use. Starting in the 1960s, xerography began to overtake A. B, Dick's older mimeograph technology.
John Stetson was president of A. B. Dick when he was appointed Secretary of the Air Force in 1978.
In 1979 the company was acquired by the General Electric Company (a British firm, not to be confused with the American company General Electric). In 1988 the company acquired Itek Graphix, a leading manufacturer of plate-makers for duplicators (small format offset presses). By the late 1990s it was a division of the Nesco company of Cleveland.

I've heard that AB Dick got acquired by Presstek.
I've just started reading from a site called the OfficeMusuem.com about copy machines. Stay tuned...
Posted by BBat50 at 5:54 PM 12 comments: