I can remember  that my cousin and I called it the ant game and in my version, the head and the body were the same color and the legs, antennas, and eyes were yellow
one of my colleagues (Kim) when she saw my new purchase from Ebay. 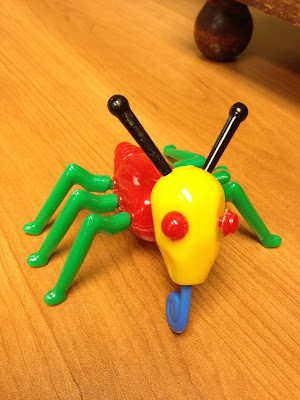 The Cootie game was marketed as an 'Educational Game Suitable for All Ages."  It was pretty popular when I was a kid in the 60s. It seemed like every family had one. 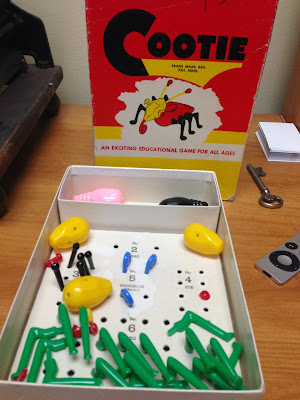 The Cootie Game was a turn-based game that could be played with up to four players. The goal was to build assemble all the parts into a complete free standing  plastic bug - a cootie. Created by William Schaper, Cootie went on the market and was a huge hit 1949 (Was there a wood version originally or was it always made out of plastic?). In 1973, Cootie was acquired by Tyco Toys, and, in 1986, by Milton Bradley which was part of Hasbro.  It continues to be available in stores. 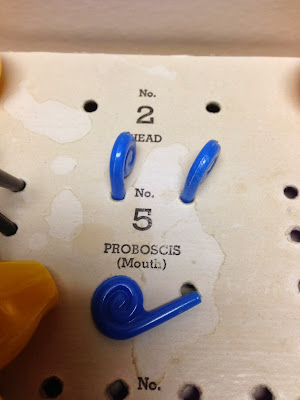 There were other cootie games sold by other manufacturers but only this one went big time.  Does anyone know anything about the origin of the word "Cootie"? 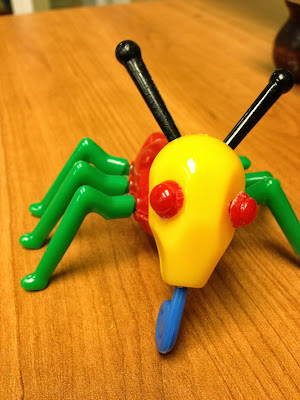 Wikipedia reports that: The earliest recorded use of the word "cootie" appears in Albert N. Depew's World War I memoir, Gunner Depew (1918): "Of course you know what the word 'cooties' means....When you get near the trenches you get a course in the natural history of bugs, lice, rats and every kind of pest that had ever been invented."[5] The word may be derived from Malaysian kutu, a head louse.[6] In North American English, children use the word to refer to a fictitious disease or condition, often infecting members of the opposite sex.[7]

It continues...In 1948, Minneapolis, Minnesota postman William H. Schaper[8] whittled a bug-like fishing lure he believed had toy potential, and sold it (and others like it) in his store as a sideline to his homebound business of manufacturing small commercial popcorn machines.[9][10]Eventually, he created a game around his creation, and, in 1949, molded it in plastic and formed the W. H. Schaper Mfg. Co. Inc..[1][9]

Other Cootie Games (also from Wikipedia)...

Cootie Game, ca. 1915
Schaper's game was not the first based upon the insect known as the "cootie". The creature was the subject of several tabletop games, mostly pencil and paper games, in the decades of the twentieth century following World War I.[9] The Cootie Game fashioned by the Irvin-Smith Company about 1915 was a hand-held game that involved tilting capsules into a trap[9] over a background illustration depicting a WWI battlefield. In 1927, the J. H. Warder Company of Chicago released Tu-Tee, and the Charles Bowlby Company released Cootie; though based on a "build a bug" concept similar to Schaper's, both were paper and pencil games.[9] In 1937, Rork's released The Game of Cootie, and it too was a paper and pencil game.[9] A paper and pencil party game called Beetle is popular in Britain but its date of origin is unknown. In 1939, Transogram published Cootie, a game featuring a three-dimensional wooden bug assembled in a die-cut tray.[9] Schaper's game was the first to employ a fully three-dimensional, free-standing plastic cootie.[9]