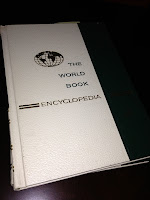 When I was in school, one of the key ingredients of every classroom was a dictionary and every school library was built around its encyclopedia, atlas, and other reference works.  To this day, the accrediting institutions still list the library with its book collection and reference materials as a key issue.

With a sweet sense of irony, I just looked up "encyclopedia" on Wikipedia and found: 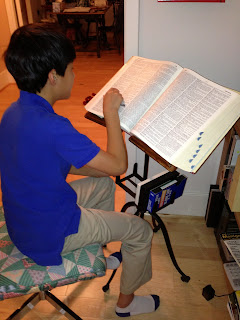 ...The beginnings of the modern idea of the general-purpose, widely distributed printed encyclopedia precede the 18th century encyclopedists. However, Chambers' Cyclopaedia, or Universal Dictionary of Arts and Sciences (1728), and the Encyclopédie of Diderot and D'Alembert (1751 onwards), as well as Encyclopædia Britannica and the Conversations-Lexikon, were the first to realize the form we would recognize today, with a comprehensive scope of topics, discussed in depth and organized in an accessible, systematic method...

In the United States, the 1950s and 1960s saw the introduction of several large popular encyclopedias, often sold on installment plans. The best known of these were World Book and Funk and Wagnalls... By the late 20th century, encyclopedias were being published on CD-ROMs for use with personal computers. Microsoft's Encarta, launched in 1993...The 21st century has seen the dominance of wikis as popular encyclopedias, including Wikipedia among many others. 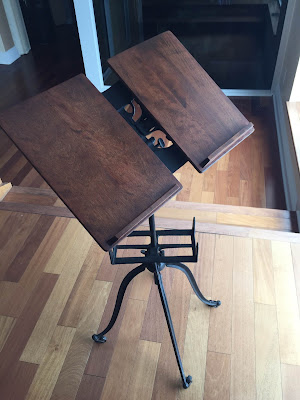 Encyclopedia Britannica  -- at its peak, had around 2,300 in the sales force....A year ago this week, the last salesman for Britannica, Myron Taxman, retired.  He was 66. He began selling the encyclopedia at the age of 22, when he was still in college in Chicago. He sold the volumes for 28 years: to farmers and to new parents without much money, to a Bears quarterback and to film director John Hughes.  (Encyclopedia Britannica Salesman Mourns End Of Print Edition)
Another memorable aspect of the encyclopedia era was the door-to-door salesman who sold them.  A surprising number of people of my generation spent some time selling them.

What did the standards say about using reference works and finding them with alphabetical order? 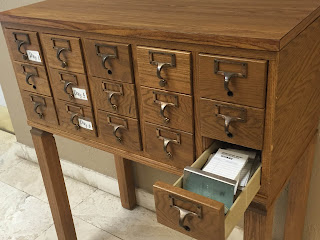 And who can talk about reference materials and refer to media centers or libraries without going back to the card catalogs and the Dewey Decimal System.
This card catalog is proudly featured in the entryway to the Time4Learning office.
Posted by BBat50 at 4:10 PM

John Edelson BTW, one of the reasons that I run my own blogs, twitter account etc is to maintain my marketing skills as social media evolves. Now that I've thought about it, for maximum impact, I should have led with an action verb and made it personal...ie...Share this if you ever sold encyclopedias or had one like this in your house...
10 March at 20:44 · Like

Lucinda Clark Cramer they're still in the basement at my house!
10 March at 21:14 · Like

Mylene D'Arelli Still have my whole set too..in a box somewhere in a closet.
10 March at 22:40 via mobile · Like

Bruce Humphreys Could you look up the inventor of the cell phone for me? My Encyclopedia Britannica circa 1965 are at my Mom's house!
11 March at 00:45 via mobile · Like

SpellingCity Nancy My parents have this set at their house! I love to thumb through the volumes. Brings back memories!
11 March at 06:12 · Like

Ronnie San Did you buy it from the guy who just got married and offered it for sale as hif wife knew everything?
12 March at 20:39 · Unlike · 1

John Edelson Ronnie, while I don't often tell jokes, when I do, they're mostly ones I heard from you. Stay funny, my friend.
2 minutes ago via mobile · Edited · Like

Lois Harmon Dimos I had these too and loved reading them. Weird kid, I know. Also remember the yearly update "year book?" Looked forward to that.
3 hours ago via mobile · Like

I used to have World Book Encyclopedia and I used it for everything!!!
I also had a collect my parents bought for me called Childcraft. I loved those books!

My folks had a 1969 green and buff World Book set. It came with this metal contraption that was about 18" x 18" x 1" and slid into a 6" thick color matched vinyl case with a bunch of paper wheel question packs, divided by subject. I remember finding it in the attic and playing with it. I can't remember what it was called though and didn't have much luck searching (or asking World Book). It worked kind of like a big Viewmaster, but with printed text questions and blank answer sheet wheels. With everything in the case was amazingly heavy. Probably 40lbs.

I used to have World Book Encyclopedia and I utilized it for everything!!!

I additionally had a gather my guardians purchased for me called Childcraft. I cherished those books!