That Sound of Music 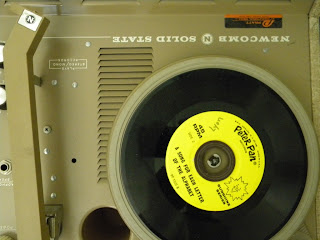 In 2010, John Edelson's big holiday gift was a phonograph. The Newcomb Audio Products record player was a present from his wife. “Since John got interested in old educational stuff,” she says, “it’s gotten really easy to get him gifts.”

John took his new old phonograph to work, and instantly incorporated into his office décor. He also played it for the Time4Learning staff at the next meeting. Jennifer Eaton has been working on shaping this homeschool curriculum with John for five years, and has witnessed his collection grow. She confirms, “He gets very excited when he gets a new addition. So excited that he shows us how it works, and how it was made, etc.”

I wasn’t present at the phonograph’s debut show-n-tell, but was eager to listen to its sound. I wanted to hear the familiar crackling static that has the power to transport me back to 1973 in the pink shag carpeted bedroom that I shared with my sister. Or even to the oak entertainment console where my mother stored her many Burt Bacharach albums.

I turned the knob on John's record player, and very carefully placed the needle onto the record. After a revolution or two at 45 RPM’s, I heard that nostalgic crackle followed by the super sweet voice of the female singer. What was a delight for me was a fright for my fourth grader. Sammi covered her ears and hastily pleaded, “Ooh mom, turn that off. That’s scary.” She said the singer's voice reminded her of a clip from a horror movie that she once saw.