So many levels of technology 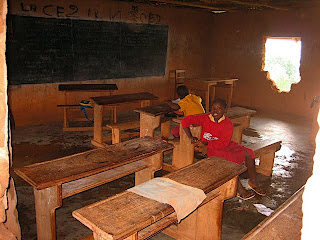 I thought I'd include a picture that I took during my time as a Peace Corps Volunteer in Cameroon (West Africa) in 1980-82.  At that time, the towns had running water and electricity (for the rich) and telephones that rarely worked. The  villages, where maybe half of the population still lived, had no telephones, electricity, or running water.

I hear that the rural schools still look this way.  But somehow, they do have working cell phones with Internet access almost throughout the country. Go figure.

The schools mostly had chalkboards, desks, benches, and a few books. A few years ago, I contributed heavily to a project to get a library of books (think several bookshelves) into thirty rural schools in Cameroon.   Isn't it odd to envisage these technically primitive schools co-existing in my world of being constantly wired, and in several ways!
Posted by BBat50 at 8:55 AM