The slide rule was, in its day, an amazing tool. In the pre-digital technology era, which by the way was when I went to high school, the slide rule was the defacto method for doing large calculations that couldn't be done by hand.

The slide rule was the tool that separated the mathematically competent from all those who couldn't quite understand the magic of the logarithmic scale.

It's amazing to think of the calculations and achievements that were done on a slide rule. World War II with all the weaponry, airplanes, radar technology, and even the atomic bomb...all developed with the help of the slide rule.

The Trident submarine, the early lasers, and Interstate Highway Program were all developed with the calculations done on slide rules.

The Gemini, Mercury, and Apollo Space Programs by NASA including the trips to the moon were calculated on slide rules

I was going through a vintage 1958 HOLIDAY magazine, and came upon this ad. It appears that a group of busy engineers and architects are engaged in the challenge of building a new urban tower. 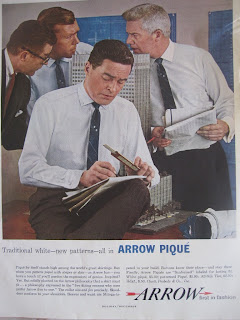 Nothing earth-shatteringly new to report on slide rules...obviously, since this ad is 53 years old, but with a trove of vintage magazines at my disposal, I like finding examples of how education indirectly creeps into popular culture.

Here is a slide rule in an advertisement.

The image is clear, a slide rule in the hands of these men creates a smart picture of success. It helps sell brands and creates a whole image.

Today of course, the day of slides rules has passed.  An ad today would feature men with Smart Phones and they probably would have different hair cuts and shirts. But  mastery of the slide rule, in its day, was the height of a certain worldly savoir faire than stank of success and competence.

I was just reading a blog about how to build your own educational tools. I thought it deserved a call-out here:
Fairy Dust Teaching