I just attended CYSTE  (Conference on Cyberlearning Tools for STEM Education) which was a thrill in a number of ways. It was a conference of highly motivated professionals working and researching collaboratively to figure out how best to move forward with technology and STEM education. 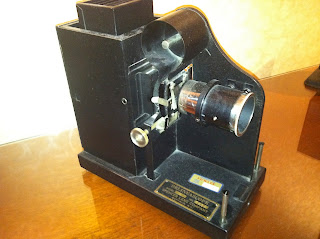 I was struck by the fact that most speakers were very  optimistic about the potential for a positive transformation of education through technology.

The conference, held in conjunction with the NSTA (National Science Teachers Association) Annual Conference in San Francisco was held at the Claremont in Berkeley and appropriately, the hallways were decorated with retro technology. For instance: this old filmstrip projector was called a Delineascope and is marked Property of Fowler High School.  It was made by the Spencer Lens Company of Buffalo New York and is Number 6634.

Right next to it was an old film projector.Unfortunately, my cell phone picture of it is not adequate to make out the manufacturer or item number.

I appreciated the juxtaposition of spending the days discussing how the Ipads and Android smart phones and other amazing new devices were full of potential to transform education while we had examples of previous transformations sitting in the hall. 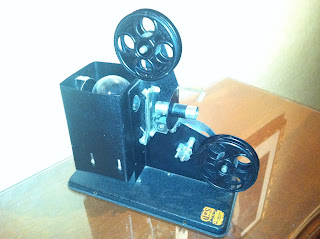