Thirty years before SpellingCity.com was launched, spelling, for most kids, was not F-U-N. 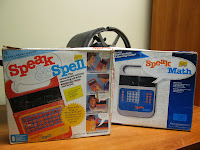 I was eight years old the Christmas that Speak & Spell made an appearance on many-a-list to Santa. Always a "word nerd," my parents apparently didn't think I needed any extra help with spelling, so instead of Speak & Spell, I got a Little Professor from Santa instead. (math was never my strong suit). 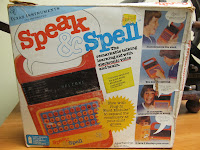 My friend, Jennifer, however, got a Speak & Spell...and it was awesome! Its computerized voice made it sound like a futuristic robot. We used it not only to play spelling games ourselves, but as a giant game show board for our Barbies, a la "Wheel of Fortune." Ahhhh...memories.

Despite references to it in movies like "Toy Story" over the years, I had all but forgotten about Speak & Spell. Several weeks ago, however, I came across a post on Facebook about the toy and  nostalgis hit big time. 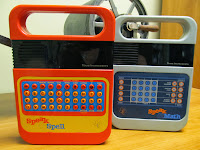 I knew that other children of the '70s and '80s could relate, so I shared a photo of the original Speak & Spell on SpellingCity's Facebook page. The post was a hit, drawing nearly 2,000 likes, 250 shares and 95 comments!

Upon seeing my post about Speak & Spell, John (a.k.a. the Mayor of SpellingCity) asked where he could get one for his retro ed tech collection. In his teens when Speak & Spell was released, John wasn't familiar with the SpellingCity of the 1970s. He was thrilled to receive not only an original Speak & Spell as a Hanukkah gift, but a Speak & Math as well! 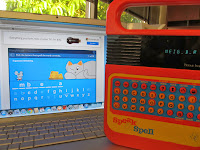 Technology has changed a whole lot in the past 35 years. SpellingCity.com recently introduced five new games, bringing our total offering up to 30 games (with full graphics and feedback)! But, then again we all like to wax nostalgic once in a while don't we?

Just think, some day our children will be saying, "Hey, remember SpellingCity.com? That was a lot of fun, wasn't it?"

Email ThisBlogThis!Share to TwitterShare to FacebookShare to Pinterest
Labels: speak and spell, spelling